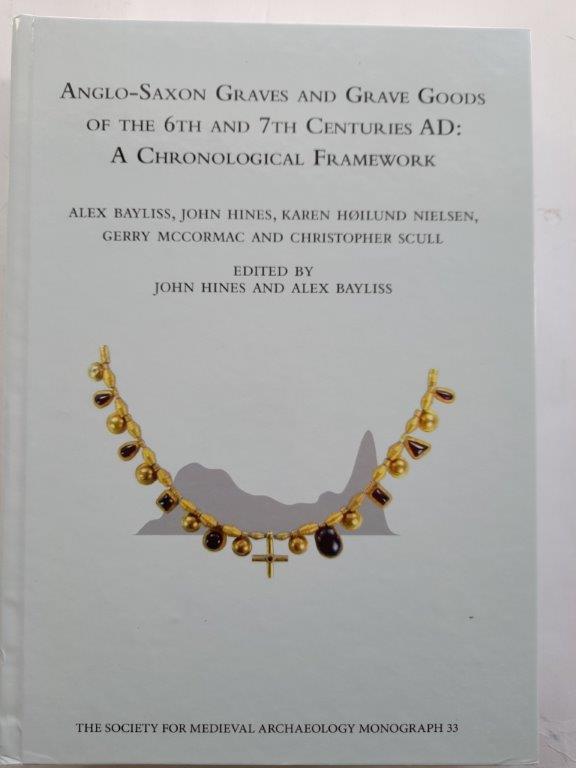 Anglo-Saxon Graves and Grave Goods of the 6th and 7th Centuries AD :A Chronological Framework

xix + 595pp, inc. figs & tables, laminated board, 31x22cm. abraded top edge of rear cover & slight shelfwear The Early Anglo-Saxon Period is characterized archaeologically by the regular deposition of artefacts in human graves in England. The scope for dating these objects and graves has long been studied, but it has typically proved easier to identify and enumerate the chronological problems of the material than to solve them. Prior to the work of the project reported on here, therefore, there was no comprehensive chronological framework for Early Anglo-Saxon Archaeology, and the level of detail and precision in dates that could be suggested was low. The evidence has now been studied afresh using a co-ordinated suite of dating techniques, both traditional and new: a review and revision of artefact-typology; seriation of grave-assemblages using correspondence analysis; high-precision radiocarbon dating of selected bone samples; and Bayesian modelling using the results of all of these. These were focussed primarily on the later part of the Early Anglo-Saxon Period, starting in the 6th century. This research has produced a new chronological framework, consisting of sequences of phases that are separate for male and female burials but nevertheless mutually consistent and coordinated. These will allow archaeologists to assign grave-assemblages and a wide range of individual artefact-types to defined phases that are associated with calendrical date-ranges whose limits are expressed to a specific degree of probability. Important unresolved issues include a precise adjustment for dietary effects on radiocarbon dates from human skeletal material. Nonetheless the results of this project suggest the cessation of regular burial with grave goods in Anglo-Saxon England two decades or even more before the end of the seventh century. That creates a limited but important discrepancy with the current numismatic chronology of early English sceattas. The wider implications of the results for key topics in Anglo-Saxon archaeology and social, economic and religious history are discussed to conclude the report.

Title: Anglo-Saxon Graves and Grave Goods of the 6th and 7th Centuries AD :A Chronological Framework

Anglo-Saxon Graves and Grave Goods of the 6th and 7th Centuries AD :A Chronological Framework